Robin Simon's review of 'Miró, Calder, Giacometti and Braque: Aimé Maeght and his Artists' (Royal Academy, London, until 2 January 2009) in the New Statesman might make you think about how the reputations of some 20th-century artists were created and how they have since been shored up.
One vehicle for maintaining the reputations of 'Aimé Maeght's artists' has been the impressive-sounding Fondation Maeght in St Paul de Vence. The commercial Galerie Maeght in Paris continues to flourish… 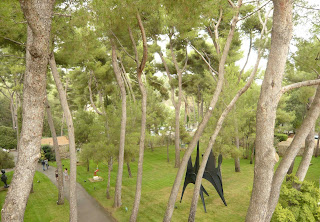 Coffee houses were well established when Samuel Johnson was growing up in the early 1700s, but tea was rare and expensive. By the end of his life tea was a favourite with all classes and Johnson would drink 25 cups in an evening. Excellent exhibits and accompanying events in this evocative location.

How good was Bacon? This shrewd selection gives him every chance to shine and there are undoubted masterpieces, such as the Crucifixion triptych of 1962 and the 1965 Study from portrait of Pope Innocent X. Room 7 has portraits of lyricism and wit amid all the blood and guts.
The Vulture, Daily Mail, 19 September 2008

And another thing:
One of the finest paintings on view is the Study for Crouching Nude of 1952. It is at the Detroit Institute of Arts, a gift from its former director William Valentiner because (wait for it) the museum of which he was currently director, the Los Angeles County Museum of Art, turned it down… ouch.

There is a brief but enjoyable interview with Bacon online:
BBC interview
Posted by Robin Simon at 10:20 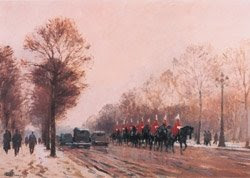 Seago was not so much the artist’s artist as the people’s artist. Until his death in 1974, Seago defied the trendy art establishment to become the most popular of ‘traditional’ painters, loved by high and low alike. Splendid show filled out with loans from Prince Philip, his admirer and painting companion. 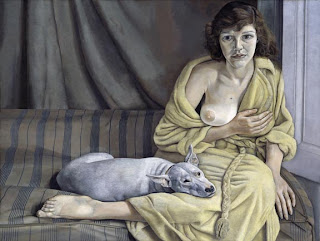 ‘The Naked and the Nude’
Mima, Middlesborough

Lucian Freud’s 1951 Girl with white dog features in a fine selection of paintings from Tate Britain at the swish new Middlesborough Institute of Modern Art. The building is fun and holds an impressive permanent collection of 20th-century British works, with plenty of contemporary ‘cutting edge’ art on view. 'The Vulture', Daily Mail, 5 September 2008
Posted by Robin Simon at 12:30

Selection of rarely seen treasures from the Tate's drawings collection. Superb draughtsmanship from the likes of Cozens, Cotman, Turner and Burne-Jones, a tradition continued in the twentieth century by such as Nevinson, Kennington and Spencer. The Tate's insistence upon displaying stuff by Tracey Emin and chums amid such skill is self-defeating.

PS what I did not mention in the paper is that the efforts of Tracey Emin and David Shrigley are so poor that, to quote Shrigley, 'You've got to laugh.'
Or weep, for British art…
What Shrigley actually said, with unconscious irony, was: 'It’s a matter of making fun of the things you could get depressed about. You've got to laugh.'
See for yourselves on this link: feeble stuff
Posted by Robin Simon at 11:14 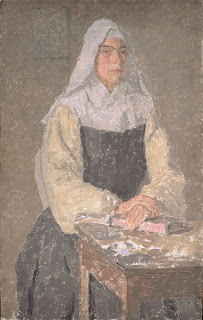 If you like Gwen John, you will like this lugubrious display of nuns. After her disastrous love affair with the sculptor Rodin, John converted to Roman Catholicism. The six portraits of the local Mother Superior were commissioned, one for each room in the convent. It suited the artist's repetitious nature.