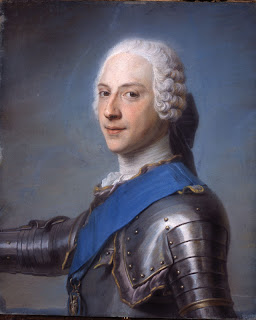 Daily Mail, and watch on STV

Last year (2008) the Scottish National Portrait Gallery’s best-known and treasured portrait of Bonnie Prince Charlie was claimed instead to be a portrait of his younger brother, Henry Stuart, Duke of York, who later became a Cardinal and wished to be known as ‘King Henry IX’ of Britain.

The pastel by Maurice Quentin de La Tour was acquired by the Gallery in 1994 for £22,000 and has been celebrated as such ever since. But then in 2008 Bendor Grosvenor, a director of the London portrait dealers Philip Mould Ltd, made his startling claim in The British Art Journal that the portrait does not show Charles but rather his brother, Henry Stuart, when he was Duke of York and before he was made a Cardinal.

At the time, the Scottish National Portrait Gallery dismissed the claim, partly because the expert on Jacobite portraiture, Dr Edward Corp of the University of Toulouse, France, had published the portrait as an authentic image of Bonnie Prince Charlie, in the standard work on the subject, The King over the Water: Portraits of the Stuarts in Exile after 1689, published by the National Galleries of Scotland in 2001.

Now Dr Corp has reversed his opinion in an article in The British Art Journal (Vol X, No. 3). The portrait is definitely not of Bonnie Prince Charlie, he has concluded, but indeed of Cardinal Henry Stuart.
‘Whether the portrait does or does not show Prince Charles really does matter,’ says Dr Corp.
‘It is not merely the catalogue of the Scottish National Portrait Gallery which needs to be corrected. The impression which an entire nation has derived of this important historical figure should also be changed. Before its acquisition by the Scottish National Portrait Gallery in 1994, the most widely circulated image of Prince Charles Stuart (or Bonnie Prince Charlie as he is popularly called) was an early portrait painted in 1729, when the prince was only eight years old, which showed him wearing Italian court dress. Since then this pastel by La Tour has replaced it as the “official” portrait of the prince, apparently showing as a mature armour-clad 27-year-old, the victor of Prestonpans, and the hero of the escape from Scotland after the Battle of Culloden. The portrait is now reproduced in all biographies of the prince, and has been selected to illustrate the article about him in the Oxford Dictionary of National Biography.’

Dr Corp has also concluded that there was once a pastel portrait of Bonnie Prince Charlie, by the same artist, Maurice Quentin de La Tour, but that it has been lost, perhaps destroyed during the French Revolution in 1789. Dr Corp believes that the appearance of the lost portrait is recorded in a rare scent
bottle dated 1753 now in the Fitzwilliam Museum, Cambridge (above right).

The mystery is how the La Tour pastel in the Scottish National Portrait Gallery first became known as a likeness of Bonnie Prince Charlie. One red herring was the fact that the sitter was wearing armour, which was thought to be at odds with Henry’s religious vocation. Furthermore, Charles was known to have sat to La Tour in 1747, upon his return to Paris after the failure of the 1745 Rebellion.

However, Bendor Grosvenor was able to discover that Henry also sat to La Tour at some point between late 1745 and, crucially, before his creation as a cardinal by his godfather the Pope, Benedict XIV, in June 1747. Therefore, Henry’s depiction in armour was appropriate, for between 1745-6 he was in charge of a naval expedition to assist Charles’ rebellion in Scotland. Moreover, the portrait of Henry was exhibited at the Paris Salon in 1747.

Dr Grosvenor, responding to the news of Dr Corp’s change of mind, said, ‘I am delighted that Edward Corp agrees with me. The Scottish National Portrait Gallery should now look again at re-identifying the sitter in this important portrait.’
Posted by Robin Simon at 14:39