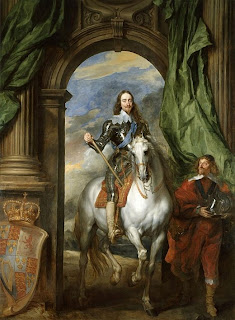 
Anthony Van Dyck’s dazzling pictures reflect the glitz and glamour of the most sophisticated court this country has ever seen. He transformed portrait painting in Britain from the moment of his arrival in as a precocious twenty-one-year-old in 1620. As this exhibition shows, his example continued to shape portraiture in Britain until well into the twentieth century. Van Dyck flourished under Charles I and did more than anyone to foster a doomed society’s outrageously lavish vision of itself. He himself was dead, in 1641, before tragedy struck, but in 1649 with the execution of the King, the world that Van Dyck had done so much to create vanished as if it had never existed. While it lasted, London was a great place for a portrait painter to be. In order to cut the right figure and curry favour, courtiers had to emulate Charles I’s passion for art collecting and patronage. Immense collections were built up overnight, stuffed with masterpieces by Titian or Raphael, while portraits and spectacular party pieces were commissioned from living masters, especially Rubens and his star pupil Van Dyck. The exhibition includes two vast paintings from the Royal Collection. One is ‘The Greate Peece’, a portrait group of Charles, his queen Henrietta Maria and their two eldest children, set in front of a view of the Thames and Westminster. Van Dyck manages his gigantic canvas with apparent ease. The children are painted with extraordinary tenderness, and the picture brilliantly combines, as was intended, majestic scale with a vision of domestic harmony. In the same room is Charles I on horseback with M de St Antoine, specifically designed to be seen as a ‘hole in the wall’ at the end of the gallery in St James’s Palace. It is another triumphant combination, this time of portrait painting with full-blown baroque theatricality. A much more intimate portrait is of Van Dyck’s mistress, Margaret Lemon, a rarely seen jewel. She was a ‘demon of jealousy’ who resented her lover painting other women and tried to bite his thumb off to end his career. Fortunately for Charles I and his court, and for us, she failed.

The exhibition is on until 17 May
Posted by Robin Simon at 17:06