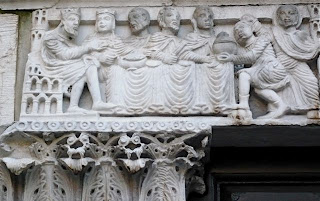 The British Art Journal, Vol. IX, No. 3
(Winter 2008/9)
The exquisite city of Lucca is famous for its romanesque architecture, for one of the best restaurants in Italy, and for being the birthplace of Giacomo Puccini (1858-1924), whose 250th anniversary has been noisily celebrated all over the world. The city now has another favourite son, Pompeo Batoni (1708-87), not that is has seemed to care very much about him hitherto. With a spectacular exhibition (6 December 2008-29 March 2009) in honour of Batoni’s tercentenary all that has changed. The show, in the restored Palazzo Ducale, was an unequivocal triumph, to the relieved amazement of the organizers, the city fathers and the regional government, all of whom had plenty to lose: because it was the first art exhibition on this scale ever mounted in Lucca. This act of faith – really, a leap in the dark – was amply rewarded, with hordes of visitors, major international attention and press coverage and, no doubt, economic benefits for the fine chefs and hoteliers of this enchanting town. Furthermore, the exhibition was bigger, better, and set in more splendid surroundings than in its previous venues. At the Museum of Fine Arts, Houston (21 October 2007-27 January 2008), it was very well displayed and accompanied by a good conference. At the National Gallery in London (20 February-18 May 2008), in contrast, it was rather cramped, insufficiently supported by proper educational initiatives and as a consequence rather poorly attended. All of this suggested a failure of nerve on the part of the gallery, which let down the outstanding work of the curator, Edgar Peters Bowron, whose lucid and civilized catalogue is a model of its kind and looks set to remain the most appealing guide in English to this attractive although ultimately elusive painter. In London, a conference was only finally mounted thanks to the Paul Mellon Centre for Studies in British Art.
In Lucca, the vast spaces of the Palazzo Ducale were cleverly articulated by discreet design while affording plenty of room to display many of the huge altarpieces and allegorical canvases that formed as large a part of Batoni’s output as his well-known Grand Tour portraits. The exhibition, which had a separate catalogue edited by Liliana Barroero and Fernando Mazzocca, with contributions by others including Bowron, made some efforts to set Batoni within the traditions of pious ‘arts and crafts’ from which he emerged. This was rather canny, since Batoni was occasionally capable of straying into cloying religiosity (The Blood of the Redeemer at the Gesù in Rome was mercifully not on display), and he himself embodied the most active piety with evident delight in the pleasures of the flesh (in his personal life as well as his paintings), a combination that almost defines the High Baroque. It is hard to believe there was ever a more accomplished draughtsman than Batoni, and there was a small but satisfying selection of sketches on view, including several from Eton, one of which, ‘after the Antique’, shows a satyr with a graphically detailed full-frontal erection. Whatever it has done for boys or beaks over the years, in the context of quite so many glorious nudes it was tempting to see this drawing as in some sense a self-portrait.
The Lucca exhibition also suggested the pan-European extent of Batoni’s clientele. Some of this material can make the modern viewer wince, notably the full-scale micromosaic re-working, ordered by Clement XIV for the Empress Maria Teresa, of Batoni’s oil of The Emperor Joseph II and his brother (cat. 66, 67), but it was quite right to show the two in unnerving contiguity. And there were many, many unequivocal treats on view, including the Bacchus and Ariadne (cat. 81) commissioned in a moment of chutzpah by Sir Watkin Williams-Wynn as a confronto to go with a Perseus and Andromeda from Anton Raphael Mengs then in Spain (the Mengs was stolen by the French en route and sold to Catherine the Great, and so the confronto was frustrated). Time and again, similarities to contemporary French academic painting came to mind, and perhaps the model in Batoni’s Martyrdom of St Bartholomew of 1749 (cat. 30) was even identical with that employed for Joseph-Marie Vien’s sole essay into the unconventional, his Sleeping Hermit (Louvre) painted in Rome in 1750.
Batoni was a phenomenon, and it seems curmudgeonly to retain any reservations at all in the face of such marvellous painting. And yet, for all his accomplishment, it is only rarely that one feels like saying of this particular force of nature, ‘Eppur, si muove…’ Robin Simon
Posted by Robin Simon at 19:11

This is an exhibition about the man who invented those houses. English aristocrats making the Grand Tour of Italy in the eighteenth century were stunned by the country villas that Palladio had created on the mainland near Venice. The visual impact of this show makes you appreciate how it happened. Huge models of his villas, churches and palaces, many cut open or hinged in sections, are in every room. And so, if like me you find plans and elevations tricky to imagine as the finished article, the work has been done for you. Palladio’s drawings are things of unimaginable beauty in themselves. There are also glorious paintings by the likes of Canaletto, El Greco and Tintoretto to make this a feast for the eye as well as the imagination.

Palladio was the first person to marry the forms of classical architecture with the country house. Until Palladio came along, they were just big farms. Suddenly, these working estates reflected the graceful palaces that noble families had become accustomed to in Venice and Vicenza. Palladio designed those too. When they went to church on Sunday, they entered his adaptations of Roman temples. Or visiting the town hall, they would find themselves staring in wonder at Palladio’s transformation of a muddled medieval market into a public building straight out of ancient Rome. This is the astonishing Basilica in the centre of Vicenza, and a vast model in this exhibition shows how Palladio’s genius turned it into a vision of harmonious proportions. He cheated, by fiddling the dimensions of the openings so that the wonky streets inside the market appear to be aligned.

Palladio changed the face of Europe. Just look around. At the Royal Academy itself, the National Gallery, or the Banqueting House in Whitehall. And throughout England we still have those stately homes, even if they prove that it is now the National Trust that has the upper hand…
Posted by Robin Simon at 17:17