Colin Cohen was frustrated that so many portraits of his family have gone walkabout. He knows they are out there, but where? And so he has created a site to hunt down 'orphaned' portraits:
http://www.missingportraits.info/
Colin introduces his website:

'MissingPortraits.info is a site devoted to so-called ‘orphan’ portraits. Starting with my own family, of whom a surprising number of portraits have been painted which then vanished from sight, my aim is to open the site to all who have lost touch with, or found, portraits.'
Portraiture is peculiar. At the time a portrait is made, the most important thing, at least to sitter, family and friends, is how good a likeness it is. In no time at all, however, Colonel Blimp of the Bluffshires has been demoted to the ranks of  'A gentleman in a red coat'. Then it is all a matter merely of how good the painting is, even supposing that the name of the artist had been retained. And so let's hope that Colin's initiative will develop, with contributions and links, so that hidden knowledge can be shared, names returned to gentlemen in red coats, and artists reunited with their sitters.
Talking of which…
A major Hogarth discovery will feature in the next British Art Journal, in Gwen Yarker's introduction to her exhibition 'Georgian Faces: portrait of a County' at the Dorset County Museum, Dorchester, 15 January-30 April 2011
Posted by Robin Simon at 17:48

The Patrick Heron written about by Adrian Clark in his new book (British and Irish Art 1945-1951: From War to Festival, Hogarth Arts, 2010) was the highly regarded British artist who lived 1920-99. He looked like this, in a 1954 photograph by Ida Kar in possession of his daughters Katharine and Susanna Heron.


Patrick Heron was also a very well-known critic who wrote regularly for such journals as the New Statesman.
It turns out there is another Patrick Heron, also a writer, but never an artist. Unfortunately, his photograph crept into Clark's book (page 117) in place of the painter's. This Patrick Heron writes about the imminent ending of the world and the return of the Antichrist. Hey! it's not that bad, Patrick, just a mistake with a photograph…
Posted by Robin Simon at 16:44

The William MB Berger Prize for British Art History 2009 of £5000 was awarded to Diana  Donald and Jane Munro for Endless Forms: Charles Darwin, Natural Science and the Visual Arts at a reception at the Paul Mellon Centre for Studies in British Art in London on Wednesday 7 July 2010, and was presented by The Hon Lady Roberts, Royal Librarian. 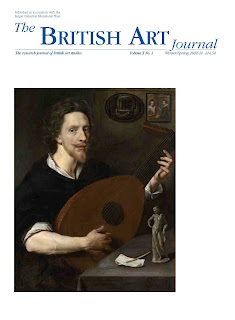 Ten years of The British Art Journal
[Editorial]
This special double issue of The British Art Journal [Vol. X, NO. 3, Winter 2009/2010] celebrates ten years of the journal’s existence. Our first numbers were supported by a few private individuals but also by advertisers, most of whom have remained with us ever since. One of those with us from the start is the Mark Weiss Gallery, which itself celebrates twenty-five years in 2010. The intriguing and in some ways still mysterious portrtait on the cover has been researched in depth by the Weiss Gallery, the fruits of which have been published in a book (available from the gallery) with contributions from art historians (including Sir Roy Strong, Michael Wilson, Jeremy Wood, Duncan Thomson and Tim Wilks) but also music historians (including Benjamin Hebbert) and the conservators who restored it. The painting was the subject of an absorbing one-day seminar at the gallery on 25 February 2010. It is an appropriate image for our cover because it exemplifies the theme of this special issue, which is British art in an international context. The artist was probably Flemish; the sitter was of French Huguenot stock, active in the court of the Scottish Stuart on the throne of England; the small oval painting on the back wall is signed (and dated 1613) by its own painter, Hendrick van Steenwyck the Younger (c1580-1649), either Dutch or, more probably, Flemish, who was resident in London from 1617. On the table beside the sitter is a statuette of Antinous and a piece of paper bearing a Latin epigram which contrives to include the notes of the six-note scale (precursor of ‘do, re, mi’) devised or discovered by Guido of Arezzo in the eleventh century: ‘VT RElevet MIserum FAtum SOLitosque LAbores.’
All in all, the painting is a fine international puzzle, and it provided ample material for a remarkably fruitful and amiable discussion among experts assembled from Britain and abroad, from museums, academe, the dealing world, and the musical word (both academic and performing). The seminar is also significant because it draws attention to the ways in which scholarship and the commercial art world, far from being mutually incompatible, can benefit from co-operation. Many suspect, indeed, that the possession of expertise in the examination of paintings is no longer the norm in the academic world. Rather, it is to be found within museums (in some, alas, to a decreasing extent) and with dealers. It would be a great thing if this remarkable seminar was the precursor of many more such collaborations, always provided, of course, that they are conducted in the same refreshing spirit of mutual respect and enjoyment as this was. An exquisite recital of Lanier’s music was shrewdly scheduled to occupy the period immediately following – another international note – an outstanding lunch of Italian food and French wine.


The William MB Berger Prize for British Art History
New arrangements for the 2009 award are in place in order to simplify the procedure. The qualifying period has been changed. Books for the 2009 award would have been considered if published in the period 1 September 2008-31 August 2009. Books will now be considered if published during the period 1 September 2008-31 December 2009, for this occasion only. In future, however, the qualifiying period will be the calendar year 1 January-31 December, the first time that applies being 2010.

For much of its existence the BAJ has also been aided by the support of the Berger Collection Educational Trust, of Denver, which together with the BAJ instituted the Berger Prize. This special issue, with its international theme, has also been supported by a grant from the Paul Mellon Centre for Studies in British Art, for which we are grateful. And finally, we offer out heartfelt thanks to our subscribers and readers all over the world, without whom…
Posted by Robin Simon at 15:23

How former Director Charles Saumarez Smith left the National Gallery, London, with something to remember

Robin Simon's review in the current BAJ of Charles Saumarez Smith's short history of the National Gallery, which is interesting not least for what it does not make explicit: the uncomfortable circumstances of Smith's own relationship with his chairman of trustees. Nor does he mention how the National Gallery attempted to prevent his publishing the book…

Revenge may be a dish best eaten cold, but the dust had hardly settled on Charles Saumarez Smith’s controversial departure from the directorship of the National Gallery than this elegant Parthian shot appeared. The National Gallery did its best to prevent the book’s appearance, fortunately without success, and readers will delight in the suavity and poise of this beautifully judged account. Dr Smith fingers the often poisonous trustees who have interfered with the running of the institution throughout its history. The snobbery and obstructiveness of Alfred de Rothschild especially (Manet’s paintings were ‘unnecessary rubbish’) prevented Charles Holroyd from a perceptive and inspired attempt at buying modern French paintings as early as 1906. The episode and many others offer a nightmare insight into the ways in which trustees could make a director’s job impossible. This is a situation that Dr Smith understands at first-hand, in his case, through having to put up with his chairman, someone called Peter Scott. Not that you will find Dr Smith saying such things: the reader is left to infer as much from the author’s ingenious prose. Dr Smith does not spare the shortcomings of some of his predecessors, although these, such as they were, were usually failings of timidity or dullness. Given the slightly unpleasant side, inevitably so, to much of the story, the history is perhaps mercifully brief, but it is none the less both authoritative and, best of all, delightful to read.