William L Pressly has won the 2015 William MB Berger Prize for British Art History for his brilliant analysis of the murals in the Royal Society of Arts, London, by the 18th-century Irish painter James Barry

Dr Loyd Grossman CBE (right) presented Professor Pressly with the £5000 prize at a reception last night, Monday 7 December 2015, at the Society of Antiquaries of London 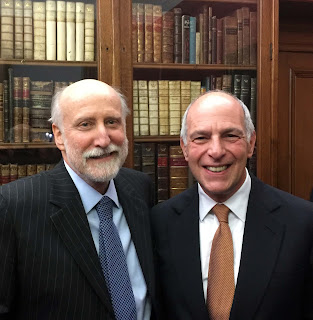 ‘Nothing could be more fitting than that this superbly produced book should have been published by Cork University Press, in the city of James Barry’s birth,’ said Robin Simon, the editor of The British Art Journal, which administers the prize. ‘Barry’s strange and wonderful murals, hidden away in the heart of London, are one of the great episodes in British and Irish art and one of the most mysterious. Professor Pressly’s remarkable explanation is a triumph of research and reflection and the book is beautifully written.’
Posted by Robin Simon at 10:53